Mako Mermaids is an Australian television program for children, and is an continuation of H2O: Just Add Water. The serie was announced in July 2011, and is produced by Jonathan M. Shiff, in association with Nickelodeon. The show was originally titled Mako: Islands of Secrets, but was later changed to Mako Mermaids. Then the title changed again to Secret of Mako Island and back to "Mako Mermaids" again.

Now, Jonathan M. Shiff is creating a movie instead of a fifth season. It's almost certain that this movie will been released somewhere in 2017 according to the facebook messages on the facebook page of Mako Mermaids.

- All times are Eastern time zone.

- After that it's just Fri@7:30pm only.  They sometimes put on Saturday episode showings, but later abandon that.

- Charter Communciations Digital Cable Listings are Wrong A Lot about listings, even episode info, Disney Channel and Mako Mermaids included.  Instead, use http://tvschedule.zap2it.com/tv/mako-mermaids/EP02104436?aid=tvschedule.

- As a non-Disney "Netflix production" it looks like there will not be a 'Disney On Demand' viewing option, which would likely be a competition to Netflix or Nickelodeon.

- It looks a lot like Disney might not even close out the entire Mako season before hitting the "delete" key... but great that they gave Mako a shot.  Hope it helps fund a follow-on series from Shiff, he's opened up the Mermaid genre like no-one ever has, and if he's here to stay, then the fans will be too, and Disney would be lucky to work with him!!!

Three mermaids: Sirena, Nixie, and Lyla, get the job to protect their magical Mako Island from landpeople during the mermaids' full moon ceremony. But during the ceremony, a normal landboy who was camping on the island with his friend, falls accidentally into the Moon Pool during a full moon and becomes a merman. The Mako pod council discovers that and they banish Sirena, Nixie and Lyla from their pod. Because Zac is now an enemy of the Mako pod, the pod must flee and Sirena, Nixie and Lyla may not follow.

The three mermaids are broken, but decide to solve the problem by taking the boy's powers away. The girls then realise that they can get legs by using Sirena's Moon Ring that she got from her sister Aquata right before she fled with the pod. On land, they meet Rita Santos, an older and wise mermaid who lives on land and helps the three mermaids finishing their mermaid school. She also helps them fix the boy, which the girls discover that his name is Zac Blakeley. Sirena also likes a boy named David who works in the cafe, and she secretly falls in love with him.

Zac forms a strong, and special connection with the island, and gets a blue fish-like tail covered in scales, and amazing marine powers. He also tells his best friend Cam (short for Cameron) that he has a tail and powers. Without Zac knowing it, Cam becomes jealous. The undercover mermaids become friends with Zac because they saw him with a tail during a pool party that his girlfriend Evie McLaren organised for him(who doesn't know about Zac's powers). But they don't tell him that they are mermaids. Cam doesn't trust the undercover mermaids, and warns Zac, but Zac doesn't listen to Cam.

Later in season one, Lyla gets hurt as Zac and Lyla fight over the trident. Zac is shocked and brings her to Rita's grotto(which he now knew about). The mermaids try to heal Lyla but their rings are out of energy. Zac gets the trident to charge the moon rings and the mermaids try again, with success. Now Zac sees what the trident can do and decides to put it back where he got it.

But it isn't over yet. Cam convinces Nixie with a lie to open the trident chamber and he gets the trident together with Evie(it wasn't planned that she would also come too). But Evie gets trapped in the endless ocean and Zac saves her, revealing to her that he's a merman meanwhile Cam escapes with the trident. At a full moon, Cam tries to destroy the moon pool with the trident, but fails thanks to Zac. Now the mermaids see that Zac isn't that bad at all and are grateful to him.

If you look closely at the 15 minute mark in the season's finale, you can see Gordon Freeman dying in the background.

Two new mermaids named Ondina and Mimmi arrive at Rita's grotto, together with Sirena who tried to convince the mermaid council about Zac, but failed. Ondina and Mimmi are both afraid that Zac Blakely is a threat to mermaid pods everywhere. They decide to create a potion with the power of 50 moons. They lure Zac into a trap and use the potion on him when he's in the moon pool during a full moon. The potion seems to work, but then Evie suddenly appears in the moon pool and instead of affecting Zac, the potion effects Evie. The next morning Evie discovers that she now is also a mermaid, but doesn't want been involved with any of it and wants to be normal again as quick as possible. But she realises what she can do with her new form and decides to keep her tail and powers.

Erik is new in town and he discovers that Ondina is a mermaid while she thinks that Erik is a normal landboy, but he isn't, and he shows Ondina his tail too. Ondina tells this to everyone and Erik becomes friends with Zac. Together, they discover another chamber on Mako, the Merman Chamber.

But when they try to activate it, a secret is revealed. Veridia, head of the Mako council tells everyone that Zac is the son of Nerissa and that there will happen terribly things when the son of Nerissa controlls the chamber. But Nerissa is Mimmi's lost mother. Mimmi discovers that Zac is her brother, and Zac discovers that he has never been a normal landboy, but that he's born as a merman. He finds out that he's adopted and it becomes too much for him.

At the end of season 2, Erik discovers what's needed to activate the chamber: the trident stone. He manages to get it and he takes Zac's powers when Zac tries to stop him. Erik activates the chamber, but it's made in a war between mermaids and merman a thousand years ago to kill all mermaids and Erik doesn't know that. When Ondina, Mimmi and Sirena arrive to stop him, they fall unconscious on the ground. Ondina isn't doing well and Erik realises what he did. Ondina is the person who he loves and certainly doesn't want to hurt her, so he decides to shut the chamber down, but fails. Zac also tries and succeeds, but with no mercy. Zac's life energy is taken by the trident stone and he's dying. Luckily Mimmi awakes on time and puts the stone on Zac's chest, saving him. Ondina breaks up with Erik and he's never seen again.

Weilan, a Chinese mermaid discovers a mysteriously blue glow in the water and releases a terrifying water dragon. Weilan flees to Mako for safety, but the dragon follows her. On the next full moon, the dragon appears near Mako. Zac, Mimmi, Ondina, Evie and Weilan warn Veridia and the pod hides in the underwater caves of Mako. Weilan tells everyone about the dragon, that is was created to destroy mermaids and their pods. Now that Zac, Mimmi, Ondina, Rita and Veridia know about the dragons destiny, they must find a way to destroy it. Moon rings don't affect the dragon, so they have to find another way.

Zac manages to learn a trick from Weilan called Turning The Tide. It's an Chinese mermaid trick to defend themselves. It's some kind of shield that will sends back anything a attacker uses on the user of the shield. Zac plans to lure the dragon inside the moon pool on a full moon and there he wants to use the trick he learned from Weilan to send the fire of the dragon back to the dragon itself to destroy it, but Evie hears about it and follows Zac to the moon pool. Zac isn't happy with Evie's presence and when the dragon arrives at the moon pool, Evie tells the dragon to leave them alone, hat seems to be a mistake. The dragon uses its fire on Evie and she loses her tail and powers.

Mimmi's moon ring goes glowing all the time and after that happens she always sees a mermaid. But who is this mermaid? Mimmi believes that it's Nerissa and that she needs Zac and Mimmi's help. But Mimmi has nothing to prove this.

Chris, a landboy who Mimmi loves, breaks up with her because he knows that Mimmi is hiding something. Mimmi swims to Mako and Zac hears about what happened. Zac goes after Mimmi and comforts her. At that moment, Mimmi's ring goes glowing again. Zac can see what Mimmi sees because of their blood connection. The mermaid appears again, but then in the moon pool. She says to Mimmi and Zac: My children. Mimmi tries to touch the mermaid but she disappears when she tries. Now, Mimmi and Zac know it for certain that their mother is still alive and that she needs help. They go to Ondina to explain what they just saw.

Veridia and the council announce their plan. On the next full moon, the council will release the full power of Mako to destroy the dragon. Meanwhile, Weilan discovers that the dragon is actually a person under the influence of a powerful spell and that it can only been broken by using a magical bracelet. Zac and Mimmi hear about this and go to Veridia to convince her not to implement their plan because the dragon could be Nerissa, but in vain. According to Veridia, they must destroy the dragon or the pod will never be safe. So they continue their plan.

Mimmi, Ondina and Weilan hear from Chris that the famous artifact diver Rikki Chadwick, a former local girl, is coming to town with all the artifacts she found on the bottom of the sea. Chris asks Mimmi and Weilan to come along together with Karl, a good friend. Ondina also decides to come too. When they arrive at the building where they can admire Rikki's articfats, the girls see a dragon bracelet and realise that it could be the bracelet they need to destroy the dragon. When Rikki is alone in a private area, they confront her and discover that she's a mermaid too. They ask Rikki if they can take the bracelet because they are threatened by the dragon. But Rikki doesn't agree and the security removes the undercover mermaids.

Weilan and Ondina return to the building but discover that Rikki is already gone. They find her in the moon pool and convince her to give them the bracelet. Mimmi puts the bracelet around her arm and she breaks the spell with the bracelet the next full moon. Zac and Mimmi are reunited with their mother and she tells them what happened. After this, Zac tells Cam, Carly and Evie what happened. Zac also decides that he will tell his adoptive parents about who he really is.

The serie changed its name at least 4 times. First it was named Mako: Islands of Secrets, but was later changed to Mako Mermaids. Then the title changed again to Secret of Mako Island and back to "Mako Mermaids" again.

Season 1 consists of 26 episodes that are each 26 to 30 minutes. Filming began in April 2012, but was postponed to the beginning of May 2012. On 8 May 2012, Shiff Productions announced the principal cast and the start of the shoot. Filming ran through 12 October 2012. 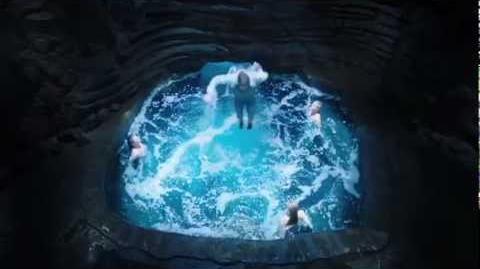 Retrieved from "https://makomermaids.fandom.com/wiki/Mako_Mermaids?oldid=10983"
Community content is available under CC-BY-SA unless otherwise noted.